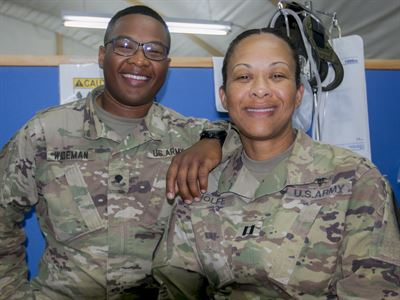 CAMP BUEHRING, Kuwait, May 2, 2017 — One of the most challenging parts of deployment for many soldiers is being away from friends and family. Soldiers and family members alike often lean on others who share a similar experience during long periods apart.

But one family in the 1st Cavalry Division’s 3rd Armored Brigade Combat Team is sharing an experience here to make deployment just a little bit easier.

Wolfe, a native of Kingston, Jamaica, began her Army career as an enlisted lab technician 24 years ago.

“I had two sisters who were in the Army,” she said. “I followed them in. In a family of nine, we couldn’t afford college, so I had to do something to be able to get some kind of college education, and that was the way.”

As far back as she can remember, she said, she wanted to be a nurse. “It’s just something I wanted to get into to help people,” she added.