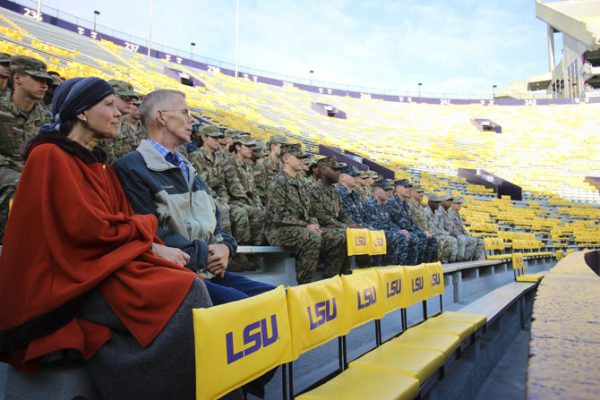 On Thursday afternoon, clouds cast a shadow over a somber Tiger Stadium. About 30 people slowly filed into the student section of the stadium where a chair honoring prisoners of war and soldiers missing in action was unveiled by the LSU Corp of Cadets and the Tiger Athletic Foundation.

Death Valley was uncharacteristically quiet with the exception of five or six student athletes completing their drills of running up and down the stadium steps. As the event drew closer, about 140 student members of the University’s ROTC program filed into seven rows facing the podium.

Before the keynote speaker took the podium, a student cadet announced to the audience that similar chairs honoring prisoners of war and soldiers missing in action will be installed in the Alex Box Stadium and the Pete Maravich Assembly Center.

The POW/MIA Chair will officially be unveiled at the LSU Salutes game this Saturday. In addition to the unveiling, the cadet announced that the chair will be guarded at every home game by two cadets.

The keynote speaker, Secretary of the Louisiana Department of Veterans Affairs Joey Strickland, approached the podium for a short speech honoring the 332,000 living veterans in Louisiana, as well as those Louisiana soldiers who went missing in action. Strickland, who was a part of two combat tours during the Vietnam war, has worked with the veterans of Louisiana for over 23 years.

“This is such a meaningful gesture for me,” Strickland said. “Our veterans are a living example of what it means to be selfless.”

Strickland ended his speech explaining that the nation must not forget its veterans.

After his speech, music education senior Ryan McCue blared “Taps” from his trumpet as Strickland and Lt. Col. William McGee pulled the purple drape from atop the Chair revealing a glossy black seat. To the right of the chair, a black plaque read, “This unoccupied seat is in honor of those who are still prisoners of war  or missing in action, and symbolizes there will always be a place in this stadium awaiting their return.”