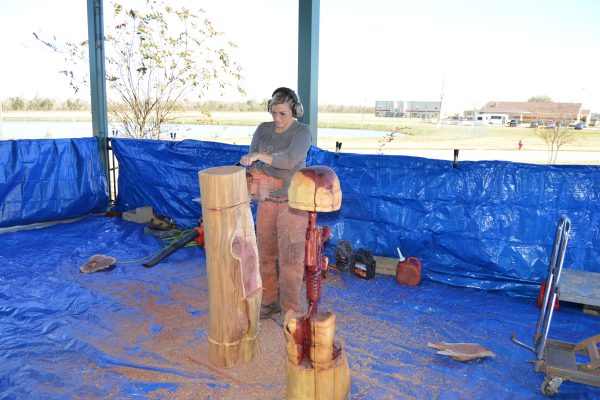 RESERVE, La. – Monday, Dec. 10, was just another day at the Louisiana Department of Veterans Affairs (LDVA) Southeast Louisiana Veterans Home (SELVH), except that the sounds of Della Meredith’s chainsaw could be heard throughout the Recreation Center and her “battle cross” creations were unearthing memories of fallen comrades.

Della Meredith of La Porte, Texas, is the creator of a myriad of pieces unlike any other. She is the proud owner of Della Meredith Chainsaw Carvings who came to the SELVH to create chainsaw carvings of three special battle cross pieces that will help honor the memories of those that have paid the ultimate price in defense of our freedoms.

“For our Department, every day is Veterans Day and every day is Memorial Day,” says LDVA Secretary Joey Strickland. “We were thrilled when our veterans home resident councils voted on having Della Meredith create these Fallen Soldier Battle Crosses that will be proudly displayed at three of our five homes.”

A battlefield cross, or fallen soldier battle cross, is a memorial to a fallen or missing soldier, consisting of the soldier’s boots, bayonet, helmet, rifle, and sometimes dog tags. As the name implies, it is generally erected at or near the field of battle, allowing the soldier’s comrades to pay their respects and to begin to process the loss. Della created three of these pieces to be displayed at LDVA’s Jennings, Reserve, and Monroe, La., homes.

“It was an honor for me to be asked to be here with you all,” said the petite artist as she addressed a of room full of her new found SELVH fans. “I just love the military, what you all represent, and these carvings are very meaningful to me.”

Her passion is evident as she meticulously uses her chainsaw to create a work of art out of a stump of cedar wood. Della says she prefers using cedar because it has roots and lines that help her bring her art to life. While the outside of the cedar has sap that she cuts through like “butter,” it’s the inside of the wood with its deep red coloring, that gives her art heart, she says.

From totem poles, statues, even bar stools, the former art teacher definitely has passion and pays close attention to detail. The SELVH residents were enthralled with the precise cuts that she made in order to have a round piece of cedar turn into something that they will cherish for years to come at the homes.

“Della Meredith is unbelievably talented,” says SELVH Administrator Brian Fremin. “This has been just a remarkable process for our veterans to be able to witness.”

The SELVH Resident Council brought the possibility of having Della Meredith do an onsite demonstration of her creating their battle cross and the veterans approved the trip and $600.00 expense for the cross. They shared stories of their time in service with her when she took a break from using her chainsaw to make intricate cuts into the battle cross carvings.