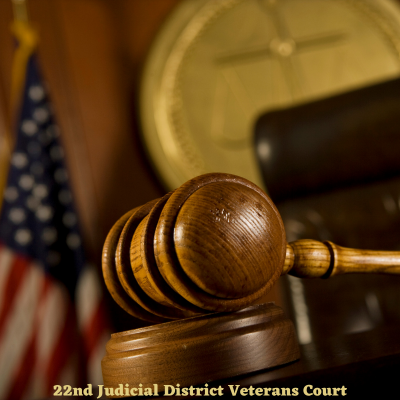 COVINGTON, La. – “It’s never too late to become who you want to be. I hope you live a life that you’re proud of, and if you find that you’re not, I hope you have the strength to start over.” — F. Scott Fitzgerald

Honorable Raymond S. Childress, the 22nd Judicial District Veterans Court Presiding Judge, said the April 3, 2019 graduation was a very special occasion for anyone that’s been involved in this veterans’ court that opened its doors April 1, 2017. “We spent a year preparing, training, and working to get the grants needed to conduct veterans court.”

Six veterans graduated from the 22nd Judicial District’s Veterans Court this past week and shared how this process has impacted their lives for the better. “This is our first graduating class,” said Judge Childress. “I could not be more proud of these men and women.”

Judge Childress is the District Judge for Division A of the Twenty-Second Judicial District Court, State of Louisiana. He received his undergraduate degree from Southeastern Louisiana University and graduated from Loyola University School of Law. He entered private practice and also spent two years as an Assistant District Attorney in the 22nd Judicial District. He was elected unopposed to the District Court, Division A for the 22nd JDC in October, 1998. Since that time he has served as an Adult Drug Court Judge and was Chief Judge from 2007-2009, He is a Past-President of the Louisiana District Judges Association and currently is the Presiding Judge of the 22nd Judicial District Veterans Court. He has previously served as a member of the Judicial Council, and presently serves as the Chair of the Supreme Court’s recently created Council of Specialty Court Judges.

“This was a team effort from the very beginning,” said Judge Childress to the crowd of supporters gathered in courtroom that morning. “Darlene Graves has been a tremendous help to us,” he said, referring to Louisiana Department of Veterans Affairs (LDVA) Veterans Assistance Counselor in the St. Tammany Parish Office. “Our community really does support the veterans here.”

LDVA Secretary Joey Strickland shared some words of wisdom with the graduates, reminding them, “The goal of these Veterans Courts is to help veterans overcome difficulties, and reduce recidivism among our veterans.  But, perhaps most importantly, the goal is to provide the men and women who have served our country with the support here at home that they need and deserve.”

Secretary Strickland left the graduates with a few final words, “To each of you veterans who have committed to completing this program, I say:  keep on keeping on – It will pay off for you and your loved ones. And to those of you who are graduating today: Congratulations!  I leave you with one final encouragement:  Never forget what the people here today have invested in you.  Never shirk from giving back one day to someone else who walks the path you have walked.”

One of the graduates, U.S. Army veteran Roderick Jackson, who served in the Infantry Division for six years and did several combat tours said, “I had a hard time when I came home. It was a real challenge for me. I am glad that this vets court exists because it gave me a new start.”

He talked about how during Army training you were asked to scale a wall that was too tall for you to climb alone. Soldiers had to learn to work together to so that they could all climb over the wall. They never left a soldier behind. “In Veterans’ Court, you don’t have to do it alone either,” he said. “I will be coming back to help the vet and the next vet and the next vet climb over whatever hurdle they’re facing.”

U.S. Air Force Veteran Renee Brockhaus shared how her struggles with addiction negatively impacted her life and her relationships. “I hate this disease, but I love this program.” Her words of advice to other veterans, “You have to get away from your excuses and do the work. I love this program. It saved my life.”

Judge Childress ended the graduation by saying, “Veterans understand responsibility. Once they come to the conclusion that we have their best interest in mind – they commit.”

He went on to say, “We want you to pass this success on to others. We are hopeful that many of you return to this court a mentors. I just encourage you to continue to be honest with yourselves.”

The 22nd Judicial District Court Veterans Court, which is a specialty court, was established to address judicially involved armed forces veterans who suffer from drug or alcohol dependence, post-traumatic stress and/or closed head injury. It is modeled after drug and behavioral health courts. The cost per client per year is estimated at $3,403.50 for nine months. To find out more about this program, please visit: 22nd JDC Veterans Court.