Bossier teen uses senior project to give back to veterans 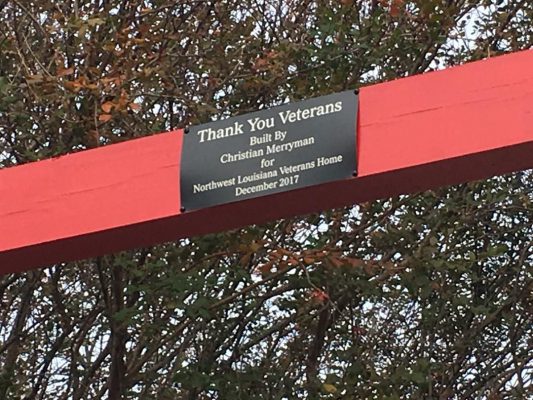 A beautiful, custom built swing now sits at the Northwest Louisiana Veterans Home in Bossier and its journey started in the heart of a Bossier teen.

Christian Merryman went above and beyond on his service project at Airline High school, and he didn’t have to look very far for inspiration.

But due to his cerebral palsy — Christian won’t get that chance. Instead, he’s finding other ways to serve.

“I felt as if I needed to say thank you for their service because they have fought for my freedom and my liberties.”

Christian presented his project Thursday night to a panel of judges. The entire project included a research paper and public speaking component in addition to the swing.  Over the last four months, Christian has spent countless hours creating a beautiful swing as a tribute to our nation’s veterans.

“It was very challenging, from getting the wood together, from putting the nuts and bolts in, using carriage bolts to put it together and staining it and putting in the medallions using a 2-1/2″ Forstner bit. It was a very rigorous process.”

With limited use of his left hand, Christian was determined to turn his project into a reality.

“Nothing keeps him down. He played football in middle school with cerebral palsy, he does anything he wants to do,” explained his grandfather, an Air Force & Navy veteran, Jim Merryman, “It’s a result of the surgery he had when he was three years old, without that he would probably be using a walker and walk with a crouch and so on.”

Under the watchful eyes of his grandfather, and his mentor, Perry Payne, a craftsman from West Monroe, Christian’s vision came to life.

“He’s used tools that he’s never used before and I worried about his fingers being cut off drilling holes and things, but he did well, he did very well. He was always ready to work and get things done,” said his grandfather.

“Each medallion represents the department of the Air Force, Marines, Navy, Coast Guard, and Army, that’s the five branches,” explained Christian, “and then right here (pointing to the cup holder on the swing) we had to use a hole saw and use a drum sander to get that to sit in there, and here we decided to build snack tables for the top we decided to do it and make it match the swing.”

He continued, “I see a very well-built product that I think they will enjoy.”

The swing is a true labor of love.

“It means a lot, and I really wish he wasn’t handicapped with the cerebral palsy because he would make a great soldier, he’s dedicated he would do anything he is asked to do. It means a lot to us, we are so proud of him,” Merryman added.

If you’re wondering — he made an A. 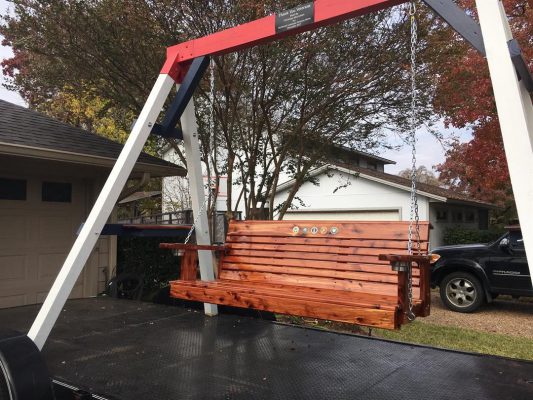