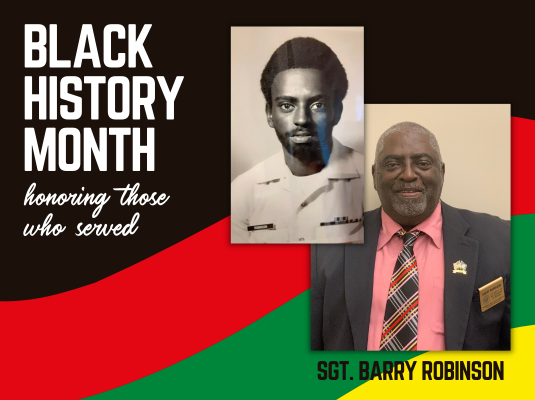 Our final Black History Month feature is another member of the LDVA team, Sgt. Barry Robinson. This feature also doubles as a congratulatory post as today is Barry’s last day in the office before his retirement!

During his tenure at LDVA, Robinson served for 12 years as the training and development program manager. He came to the Department after retiring as a senior supervisor/manager at General Motors after 28 years of service.

After finishing high school, Robinson was drafted for the Vietnam War. Upon notification of the draft, he immediately volunteered for the U.S. Air Force. He served as a Munition Maintenance Specialist dealing with bombs, rockets and missiles and minor aircraft repair. During the time in service, Robinson served in many leadership capacities such as Squad Leader, Class Leader, Equal Employment Opportunity Representative (Udorn, Thailand), Noncommissioned Officer Leadership Academy Representative with numerous awards, certificates, certifications and other accomplishments. During the two years he spent in Southeast Asia, areas of assignments and stops included Laos, Cambodia and Danang including several bases throughout Thailand. Along with many recognitions and awards, he was awarded the U.S. Air Force Accommodation Medal for his service in Thailand in support of the Vietnam War.

After completing his four years in the Air Force, Robinson attended Lansing Community College, Michigan State University and Spring Arbor University. He later attended Hope Bible Institute. His degrees include an Associate of Arts, Bachelor of Arts, Bachelors of Divinity & Biblical Studies, Masters of Biblical Studies and Theology. He has also completed all requirements as a Doctoral candidate, and his Ph.D. graduation will take place on April 30, 2022. Robinson’s new degree will be a Doctoral Degree in Biblical Psychology, and he will be licensed as a Professional Christian Therapist by the American Association of Christian Therapist, a nationally recognized licensing board for Christian Counselors.

Through the years, Robinson worked with several community groups and organizations in Michigan, Louisiana and Arkansas. Among his volunteer positions was Director of the Youth Chapter of the NAACP in Lansing, Michigan. While working at LDVA, he served on the Drug Policy Board, Presumptive System Committee, State Epidemiology Workgroup, Homeless Board, Mayor Broome’s Disparity Board, The Veterans Board, SMVF Collaborative Team and Department Service Office for VFW representing LDVA.

In addition to his training position, Robinson also held the positions of Incarcerated Veterans Liaison, Capital Area Regional Manager, Veterans Court Representative and Training Director while with the Department.

He currently serves as board member for Capital City Golf Association working with and mentoring youth and volunteers with The First Tee of Baton Rouge. Additionally, Robinson serves as the head Deacon of Port Allen Church of God In Christ and the Director of Education where he teaches Sunday school and Bible study.

Robinson is the fourth of 13 children born to Superintendent and Missionary Veotis and Georgia Robinson of Ogden, Ark. He is the proud father of two children: Dawn Robinson-Weldon and Barry Robinson Jr. and grandfather to two grandchildren: Xavier and Zora Weldon.