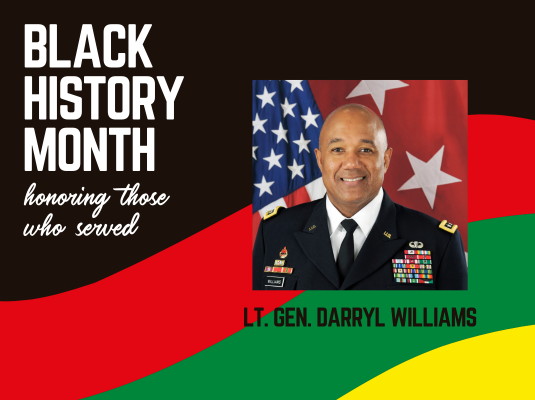 Lt. Gen. Williams is a native of Alexandria, Va. He graduated from the United States Military Academy, West Point, in 1983 and was commissioned a Second Lieutenant in the U.S. Army.

In addition to these assignments, Lt. Gen. Williams has served in key leadership positions at the tactical, operational and strategic levels to include Battery Commander deployed in support of OPERATION DESERT SHIELD/DESERT STORM; Commander, Division Artillery, 1st Armored Division and Fire and Effects Coordinator, 1st Armored Division deployed in support of OPERATION IRAQI FREEDOM; Deputy Director for Soldier Comprehensive Fitness, Department of the Army G3/5/7; and while commanding USARAF in 2014, he was involved with OPERATION UNITED ASSISTANCE fighting against the Ebola outbreak in Liberia.

He assumed duties as the 60th Superintendent of the U.S. Military Academy in July of 2018.