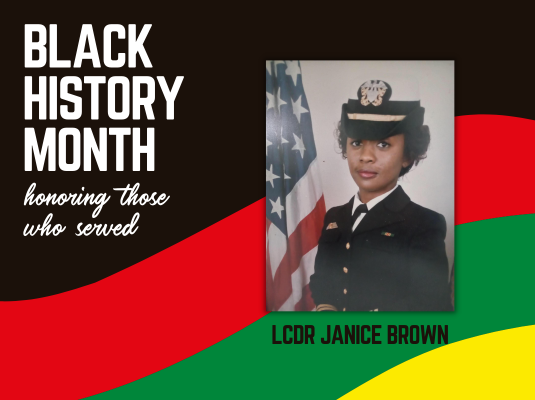 Today we are proud to feature one of our own, LDVA’s Janice Brown, for Black History Month. LCDR Brown was the third woman to receive a commission as a naval officer from Southern University and A&M College in Baton Rouge.

Currently, Brown is regional manager of the southwest region for LDVA’s Benefits Division. Janice has always been a pioneer and was the first African-American and woman to be promoted to supervisor then regional manager since the Department’s inception. When hired in October of 1999, Brown became the second female veterans assistance counselor in the state.

But Janice began blazing the trail long before she joined the ranks at LDVA. She was the first Black student body president of her high school. At 21 years of age, she became the third woman to receive her commission as a naval officer from Southern University and A&M College in Baton Rouge.

Serving in the Navy from the late 70s to the late 80s, Brown was a first in every position and job she held. During her last tour of duty, she was tasked with the duties of recruiter and associate professor of naval science in the NROTC Program at Prairie View A&M University. During the summer months, she was assigned as the senior lieutenant, trainer and instructor at the Officer Candidate School at Naval Station, Newport, R.I. Her last rank achieved was lieutenant commander.

Before joining the LDVA family, Brown worked with teenagers in group homes. She became the first female executive director of a group home in the state, and was the first in her region to acquire joint commission accreditation for her facility.

Brown has served Louisiana veterans and their families for more than 21 years with the same commitment that have permeated all her endeavors. Today, we honor her for her service to our country and to Louisiana’s veterans!