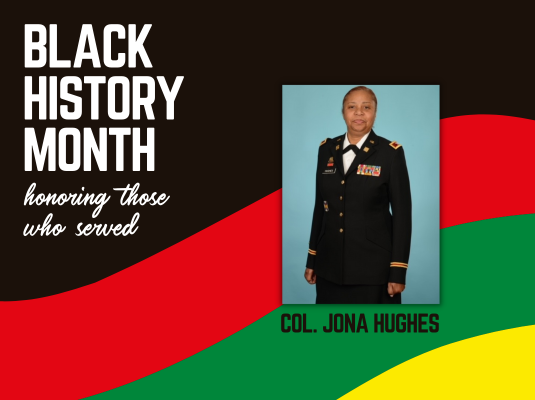 This afternoon’s Black History Month feature is Col. Jona M. Hughes, a New Orleans native. Col. Hughes was the first Black female to achieve the rank of colonel in the Louisiana National Guard.

Prior to retiring in December of 2019, Col. Hughes had the opportunity to pin the second Black female and former colleague, Col. Katrina Lloyd. Col. Hughes served in the Louisiana National Guard for 32 years in her distinguished military career and 21 years as a federal employee.

She is graduate of Southeastern Louisiana University in Hammond, La., and holds a Master of Science in Organizational Leadership from Trident University of California. Following her studies at Southeastern Louisiana University, she received her commission as a second lieutenant in the Army Reserve Officers Training Corp. and transferred to Louisiana National Guard, 2222nd Dental Detachment in Baton Rouge in 1989. Col. Hughes served in Command and various staff roles in the Joint Forces Headquarters in the Louisiana National Guard.

In 2016, cumulating assignment, Col. Hughes was promoted to the rank of colonel, and became the first Black female to obtain that rank and director of reintegration for the Louisiana National Guard. She directed all service members and their families regarding pre/post-deployment ceremonies, family and child/youth programs, suicide prevention, funeral honors and transition advising service members relating to employment and their benefits.

Col. Hughes deployed with the 256th Infantry Brigade Combat Team in support of Operation Iraqi Enduring Freedom/New Dawn in 2010 where she served as the Forward Operation Base Commander/Mayor for West Liberty Baghdad. She was responsible for more than 7,000 tenants providing life support to service members and host nations contractors.

Col. Hughes is also an avid community volunteer who spends countless hours to improve the lives of those around her. She has served chairperson for the Diversity and Cultural Inclusion Committee for the Junior League of Baton Rouge, is now a member of the Junior League of Washington, D.C. and has cultivated leadership skills among young women in the Alpha Kappa Alpha Sorority. She also makes time to mentor cadets in the Youth Challenge Program.

Col. Hughes’s personal and professional accomplishments are an inspiration to the soldiers and airmen of the Louisiana National Guard and to the young women in her community who looking for mentors like her that have “broken the glass ceiling.”