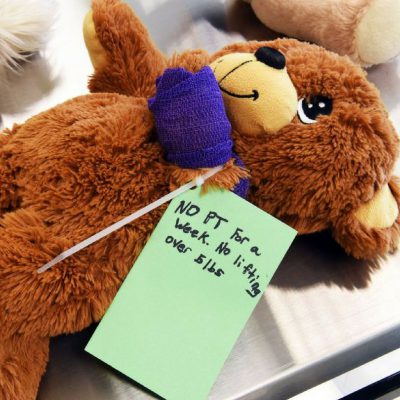 Medics at the “Teddy Bear Clinic” reattached broken limbs, sewed up lacerations and performed emergency organ transplants (replacing lost stuffing) at the Vilseck hospital over the past few weeks. The last patients will be released from medical care this week.

The goal of the clinic was to provide the veterinary workers with a safe way to practice suturing techniques on something resembling an animal without risk of working on somebody’s living pet.

“It was actually good training,” said Spc. Michael Simmons, a veterinarian technician on base. “We don’t get a lot of opportunities to work on suturing.”
The stuffed animals were provided by local soldiers and families looking to stitch up their kids’ companions.