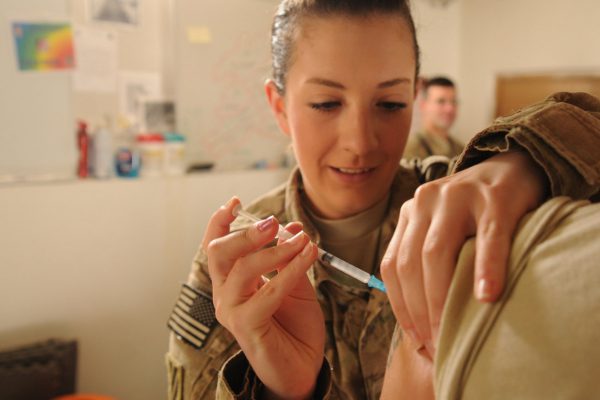 In the past week, a memo has been circulating online about possible 100 percent VA disability benefits for a particular group of soldiers.

The April 10 tasking order called on the unit to identify which of its soldiers had deployed to Iraq or Afghanistan from Fort Campbell, Kentucky, or Fort Drum, New York, between 2001 and 2007, in case they had been exposed to a bad batch of anthrax vaccine.

“Defense Health Agency representatives have verified the information is false and completely without merit,” Christina Wright told Army Times in a statement. “Once the brigade discovered the error, the correct information was published to their soldiers.”

The statement did not provide details on where the original information came from or what the unit told soldiers following the retraction of the memo.

The original tasking order sought to identify soldiers who had received an anthrax vaccination during that time at those posts, then send them to a unit physician to screen the soldiers and verify their medical records.

The statement also did not identify whether the Army had, in fact, administered vaccines from a “bad batch,” as the memo stated.

Wright did not immediately respond to a request for clarification.

A handful of studies have been done on the potential adverse effects of the anthrax innoculation, to varying conclusions — including one that compared side effects in service members to those of Gulf War Syndrome, which has been attributed to exposure to a mix of vaccines, pesticides and environmental chemicals.

A 2009 study released by the National Institutes of Health found no definitive link between the shots and side effects, up to and including death.

The report found that of the 6 million doses given between 1998 and 2007, fewer than 5,000 patients reported negative side effects.

On the other hand, a 2002 Government Accounting Office report claimed 85 percent of service members vaccinated against anthrax between 1998 and 2000 had adverse reactions — the first two years that the Defense Department had required the inoculations.

A 2002 study from the NIH found that 32 percent of anthrax-vaccinated service members studied had a specific antibody in their blood that is associated with Gulf War Syndrome.

The study’s authors found a connection between those with the antibody and certain batches of vaccine. In testing those particular batches, they found that antibody in 47 percent of patients.

However, the study did not find a conclusive link between the anthrax vaccine and Gulf War Syndrome.

“The potential side effects of vaccines, including anthrax, are generally mild and temporary,” Wright said. “While the risk of serious harm is extremely small, there is a remote chance of a vaccine causing serious injury or death.”