A Lifetime of Public Service: An Interview with Cecil Joubert 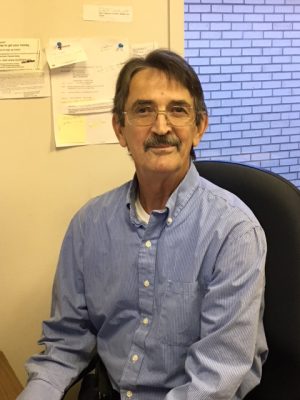 Louisiana Department of Veterans Affairs (LDVA) Veterans Assistance Counselor (VAC) Cecil Joubert grew up in Mamou, Louisiana, and has made it his life’s mission to serve others.

Mamou is located at the heart of Louisiana’s Cajun country in Evangeline Parish. The town is famous for its music and musicians, and bills itself as “The Cajun Music Capital of the World.”

He joined the military to qualify for the G.I. Bill, or Chapter 34 educational benefit, which he says, at that time, was sufficient enough to cover just about all of his college expenses.

He enlisted in the United States Army for a two year ‘hitch’ and was trained as a clerk.

Joubert was sent to Berlin where his duties in the Operations & Training Office of a Combat Engineer Unit included, “just about anything that no one else had the time or ability to do.”

Joubert drove trucks, jeeps, acted as a courier, and even drove the Commanding Officer around Europe for meetings. He had a license to run a projector, and generally helped with all training activity for the company.

After he left the service, Joubert found out that he’d had an angel from Mamou looking out for him. She graduated high school in a class just above him and had worked at the office of the Commanding General at Ft. Polk in Vernon Parish.

Fort Polk is the Army’s Joint Readiness Training Center whose mission is to train and deploy combat and combat support units. From its start as a base for the historic Louisiana Maneuvers in the 1940s, to a basic training post during Vietnam, and its current mission, Fort Polk has executed all of the Army’s missions during times of conflict and war.

Joubert says this woman secretly kept an eye out for the “Mamou boys,” and made sure that, “none of us that were at Ft. Polk at the time were sent to Vietnam.” She also ensured that they were all given relatively comfortable Military Occupational Service Codes.

He enjoyed his time in the service, but, for a man who has always been known for his integrity, observing a few Non-Commissioned Officers (NCO’s) abuse their power and make military life difficult for those in their charge left him leery of making a career out of the Army.

Luckily, he says that while didn’t happen directly to him, de did see some extreme examples of this behavior that affected several young men in his company. “I realized that any of us could have been assigned to such an NCO or officer if we re-enlisted, and I was determined not to take that chance.”

Joubert opted out of the Army when the troop strength in Europe needed to be reduced. “I was given a six-month ‘early-out’ to return to college at Louisiana State University.”

He later met his wife Melinda, who goes by Missy, and they had two daughters, Alaina and Lori, that he loves dearly and of whom he is extremely proud. “I have no doubt that they are who they are due mostly to Missy’s influence and loving parenting skills,” he says.

Alaina is a dental hygienist and Lori is a physical therapist.  The proud father says he thinks they have five degrees between them. His daughters gave him a title he is quite proud of these days as he is now a grandpa of two grandsons. He is happily expecting a third grandchild this fall.

Joubert has worked for the LDVA for almost 45 years in the Lafayette, St. Landry, Evangeline, and Allen Parish areas.  “I really enjoyed using my training to help make the lives of fellow service men and women better,” he says of his ability to use the various veterans’ benefits available to assist them.  “I was and am proud to be a mentor in some ways and to earn the gratitude and respect of some very fine people.”

Cecil Joubert will be retiring from the LDVA soon and will be sorely missed by all those he has taught and inspired. We wish him the best in this next chapter of his life, and thank him for his years of dedicated service to Louisiana’s Veterans and their families.