8 Things You Need to Know About the Purple Heart Medal 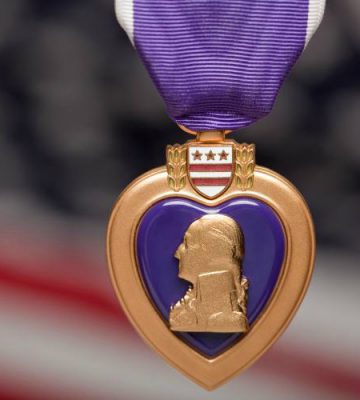 On August 7, Purple Heart Day, the nation pauses to acknowledge and remember the sacrifices made by brave men and women in the military.

In honor of Purple Heart Day, here are eight facts about the history of the Purple Heart Medal and its recipients:

The Purple Heart’s first predecessor, the Fidelity Medallion, was created in 1780 by the Continental Congress, but was only awarded to three soldiers that year.

Two years later, in 1782, President George Washington created the Badge of Military Merit. Because the Fidelity Medallion was never again bestowed, it is generally thought of as commemorative, and the Badge of Military Merit is instead considered to be the first U.S. military decoration and the Purple Heart’s predecessor. According to Washington, who designed the badge in the form of a cloth purple heart, the medal would be given to soldiers who displayed “not only instances of unusual gallantry in battle, but also extraordinary fidelity and essential service in any way.”

The Badge of Military Merit later became known as the Purple Heart, which is still presented to U.S. service members today.

In the years before 1782, when the Purple Heart’s predecessor was first created, most military awards were only given to officers who had secured grand victories in battle. The Purple Heart was one of the first awards in military history that could be given to lower-ranking, enlisted soldiers or noncommissioned officers for their outstanding service.

Thanks to Army Gen. Douglas MacArthur, the Purple Heart officially received its modern-day look and name in 1932. The revived medal was designated primarily as a combat decoration, recognizing commendable action as well as those wounded or killed in combat.

MacArthur, who wanted to refresh and rename the award in time for the bicentennial of George Washington’s birthday, worked with the Washington Commission of Fine Arts and Elizabeth Will, a heraldry specialist in the Army’s Office of the Quartermaster General.

A few years later in 1944, the qualifications for receiving a Purple Heart changed to what we know today: an award given only to those wounded or killed in enemy action.

4. Who Received the First Purple Heart in U.S. History?

During the Revolutionary War, Continental Army soldiers William Brown and Elijah Churchill were the first soldiers to receive the Badge of Military Merit, the predecessor to the Purple Heart. Brown was most likely bestowed the honor for his service during the Siege of Yorktown, while Churchill was recognized for his gallantry at a battle near Fort St. George on Long Island.

The first service member to receive the modern-day Purple Heart was Army Gen. Douglas MacArthur for his service in the Pacific theater (specifically in the Philippines) during World War II.

Although each Purple Heart recipient deserves widespread recognition, a handful of honorees standout as household names, such as the legendary Lewis Burwell “Chesty” Puller.

In 1942, Army Lt. Annie G. Fox became the first woman to receive a Purple Heart for her heroic actions during the Japanese attack on Pearl Harbor in 1941. Fox, who was serving as the chief nurse at Hickam Field, Hawaii, remained calm throughout the attack on Pearl Harbor and her hospital, and successfully directed hospital staff to tend to the wounded as they came in from harbor.

While she wasn’t the first woman to receive the Purple Heart, Cordelia “Betty” Cook was the first woman to receive both the Purple Heart and the Bronze Star. In 1943, Cook, who served as a combat nurse during World War II, sustained shrapnel wounds while working at a field hospital on the Italian front. Despite her injuries, Cook continued to work and was later commended with both awards for her heroic actions.

7. Only One Presidential Recipient

President John F. Kennedy is the only U.S. president with a Purple Heart.

Kennedy, who served in the Navy during World War II, injured his back when a Japanese destroyer collided with his patrol torpedo boat near the Solomon Islands. As his boat sank, Kennedy refused to let his injury stop him from towing a badly burned crew member to safety. Kennedy swam with the man’s life jacket strap clenched between his teeth for three miles before reaching an island and bringing the man safely to shore.

Kennedy was also awarded the Navy and Marine Corps Medal for his actions.

Curry T. Haynes currently holds the record for the largest number of Purple Hearts bestowed upon a single service member.

Haynes, who served in the Army during the Vietnam War, was awarded his first Purple Heart after an ambush in the jungle, where he was shot in the arm. After surgery in Japan, he returned to the front where his actions would later result in being awarded his nine additional Purple Hearts. In the span of one assault – which involved dodging multiple grenades – Haynes sustained a series of injuries, including the loss of two fingers.

He later received nine Purple Hearts – one for each wound – and passed away in July 2017 from cancer.

-This story was first published on USO.org in 2018