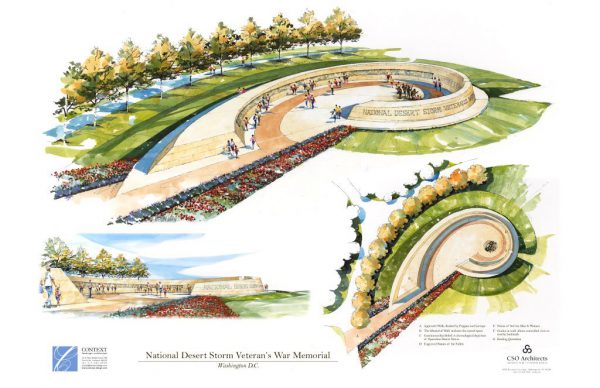 COMMENDATIONS. Commemorating the 26th anniversary of the conclusion of Operation Desert Storm and to support a National Desert Storm War Memorial in Washington, D.C.

To commemorate the twenty-sixth anniversary of the conclusion of Operation Desert Storm and to indicate support for a National Desert Storm War Memorial in Washington, D.C.

WHEREAS, February 28, 2017, marks the twenty-sixth anniversary of the cease-fire declaration in Operation Desert Storm as the Iraqis accepted the cease-fire terms, bringing an end to the war; and

WHEREAS, the invasion and subsequent annexation of Kuwait by Iraq was met with broad international condemnation by the United Nations Security Council shortly after the

WHEREAS, more than a half million American troops and additional troops from thirty-four countries, the largest coalition since World War II, were involved in the campaign to free Kuwait from its invasion and annexation by Iraq; and

WHEREAS, among the troops who made the ultimate sacrifice during this military operation, five military veterans from Louisiana gave their lives during the months of Operation Desert Storm; and

WHEREAS, Operation Desert Storm was America’s first major military engagement since action in Vietnam in Southeast Asia in the 1960s and 1970s; and

WHEREAS, President George Herbert Walker Bush ordered United States troops from all branches of service and their allied forces to bring all military resources to dislodge the Iraqi forces from the independent nation of Kuwait; and

WHEREAS, in a mere forty-three days of actual combat, the allied forces were victorious over the invading Iraqis, and returned Kuwait to self-rule; and

WHEREAS, at the time, President Bush stated that “during Operation Desert Storm our troops served with valor and honor to defend what was right and just”; and

WHEREAS, the president also expressed his hope that the sacrifices of the troops who gave their lives on the field of battle, in addition to those who were injured in this endeavor and all those who fought so valiantly to free the people of Kuwait from occupation by Iraq would not be forgotten by a grateful nation; and

WHEREAS, in 2014, Congress passed and President Obama signed into law on December 19, 2014, the “National Operation Desert Storm War Memorial Act”, which authorizes the National Desert Storm Memorial Association, a private group of citizens, to establish a commemorative work on federal land in the District of Columbia; and

WHEREAS, upon being selected to act as honorary chairman of the association, President George H. W. Bush stated that “as president there is no more solemn duty than sending men and women to war”, and that he was pleased and honored to work with this group to ensure that those who served in Operation Desert Storm would be remembered by the people of the United States forever; and

WHEREAS, the memorial is planned for the northwest corner of the National Mall, steps from the Vietnam Veterans Memorial and in the shadow of the Lincoln Memorial; and

WHEREAS, the memorial will be built at a cost expected to be at least twenty-five million dollars of private funds and maintained solely with private funds before reverting to the ownership of the federal government and maintenance by the National Parks Service; and

WHEREAS, the memorial will commemorate and honor those American troops who fought, died, and were injured in this wholly defensive mission to drive Iraqi forces from the independent country of Kuwait, serving as a permanent memorial to all who participated in freeing the people of Kuwait.

THEREFORE, BE IT RESOLVED that the Legislature of Louisiana does hereby commemorate the twenty-sixth anniversary of the conclusion of Operation Desert Storm.

BE IT FURTHER RESOLVED that the Legislature of Louisiana does hereby indicate support for a National Desert torm War Memorial in Washington, D.C.

BE IT FURTHER RESOLVED that a copy of this Resolution be transmitted to Scott Stump, the chief executive officer and president of the National Desert Storm Memorial Association.

Find out more at: http://www.ndswm.org/