The Story of C.D. Clement 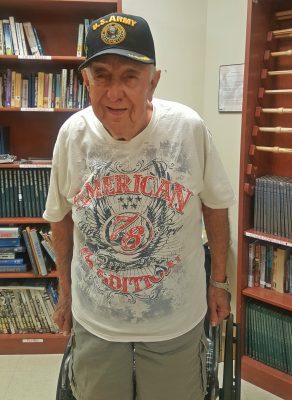 He graduated from E.D. White High School where he received trophies in football, basketball and baseball while also an honors student.

At the age of 17, with permission from his father, Clement enlisted into the United States Army. He attended boot camp at Fort Sam Houston, trained at Fort Bliss and spent 2 years on active-duty in Japan.
His fast typing skills helped him progress in his career while serving in clerical positions. His drive and commitment led him to become the youngest Master Sergeant at the age of 19. Once discharged from active-duty, he returned home to Thibodaux, La. and continued to serve in the Army Reserves.

Using the Montgomery G.I. Bill, he and another 179 veterans, including two women, enrolled into Nicholls State University when its doors opened in 1948.

Clement was quickly recruited by the Athletic Director where he and three other men formed the first weight lifting team. His main events were the clean and jerk and dead lift. At his peak, he boasts of lifting up to 250 lbs! He was also a catcher on the LSU baseball team. For the past 25 years, C.D has been an avid runner, jogging 3 miles per day with three partners.

Clement married Frances Caillouet on Dec. 28, 1948 and they became the proud parents of two sons. He graduated from LSUBR in 1951 while playing baseball.

He went on to teach French at E.D. White High School, Nicholls State and Louisiana State Universities.
After teaching, he worked as a roughneck in the oil field for five years. His career expanded to work in administration for the City of Thibodaux while owning and working a grass cutting service on the weekends. This jack of all trades went on to become the ex-officio Mayor of Thibodaux for three years after that Mayor took ill.

Clement never slowed down. During retirement, he worked as a community liaison for the First Federal Savings and Loan Association from 1988-1991 and as a senior advisor in marketing with Ochsner Health Insurance and Humana Insurance.

He also became the contact person for Nash Roberts, TV weatherman, in emergency preparedness for weather disturbances in the Gulf of Mexico in the four parishes of Lafourche, Terrebonne, St. Mary and Assumption.

Approximately seven years ago, he placed his name on the waiting list at SELVH. After he became ill, he entered SELVH on April 8, 2015.

Currently, Clement enjoys friends, music, activities and says he really likes the SELVH staff. One of his favorite hobbies is rock painting!

On Nov. 7, 2016, many living veterans from E.D. White High School were honored with an athletic trophy. SELVH Administrator, Cleveland Obey, attended the ceremony in support of Clement.

We love our veterans!